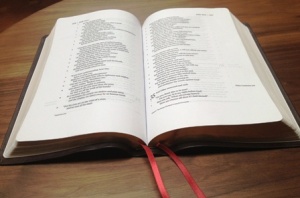 Last week we looked at the tough teaching of the Law of God delivered by Jesus at the Sermon on the Mount. We noted that while these were new teachings to those present, Jesus wasn’t completely inventing things whole-cloth, that Moses commended his hearers to love the Lord their God with all of their heart, soul, and might. God’s Law was neither being changed nor was it being abolished by Jesus; rather, it was being fully proclaimed in concert with the preaching of Jesus, “Repent, for the Kingdom of God is at hand”. Today, we’ll pick up in verse 31 and cover some of the second table of the Law (sins we commit against God by committing them against our neighbor).

31 “It was also said, ‘Whoever divorces his wife, let him give her a certificate of divorce.’ 32 But I say to you that everyone who divorces his wife, except on the ground of sexual immorality, makes her commit adultery, and whoever marries a divorced woman commits adultery.

This is a tough passage for our culture, but not nearly as tough as it was in that day. The penalty under the Mosaic Covenant for adultery was death. Leviticus 20:10 (ESV), “If a man commits adultery with the wife of his neighbor, both the adulterer and the adulteress shall surely be put to death.” We saw last week that a man is guilty of the sin of Adultery if he looks at woman with lust in his heart. That’s serious. Now we see, though, that the act of divorce sets up the man and woman for adultery. The caveat given is often misapplied to suggest that adultery excuses the sin of divorce. It doesn’t. Jesus is merely saying that the act of adultery is adultery and divorce in that case doesn’t add the sin of adultery, it was already there. How do I know that? First because I followed the language, but also because the last line doesn’t have a caveat. A man who has not known any woman but marries a divorced woman commits adultery because she has been with another man. No caveat of “unless her divorce is approved by means of her ex-husband’s adultery” can be found. Jesus will teach on marriage and divorce again later in Chapter 19. Is there ever a case where divorce isn’t a sin? No. Okay, but it’s a lesser sin if it was the result of infidelity of the spouse, right? Did Jesus present the sin of lustful desires in the heart compared to committing the act? No and no. Remember, Jesus is preaching the Law here… He IS the Gospel in the flesh for He came to fulfill the Law by laying down His life as the last and perfect sacrifice on the cross. Only in Christ can we find the forgiveness of sin… all sin. All sin is death. Only the Death of Jesus Christ on the Cross satisfies the Wrath of God in Just punishment for our sin. That there is forgiveness for sin, does not mean that sin was not committed. Jesus didn’t abolish the Law, He fulfilled it and paid the penalty on our behalf. Here, Jesus was addressing those who thought they were sinless by not physically committing the act of adultery or by securing a certificate of divorce and marrying someone else. They were wrong and they were not sinless. These days, we see some abuse this verse in a different direction, by treating divorce as the unpardonable sin. If there is no forgiveness available for divorce, then there is none available for lustful thoughts in the heart. In Christ, we have the Only forgiveness of our sins… and in Christ there is no condemnation.

33 “Again you have heard that it was said to those of old, ‘You shall not swear falsely, but shall perform to the Lord what you have sworn.’ 34 But I say to you, Do not take an oath at all, either by heaven, for it is the throne of God, 35 or by the earth, for it is his footstool, or by Jerusalem, for it is the city of the great King. 36 And do not take an oath by your head, for you cannot make one hair white or black. 37 Let what you say be simply ‘Yes’ or ‘No’; anything more than this comes from evil.

Again, tough. Jesus is tying the breaking of any oath as blasphemous, and blasphemy is punishable by death. Again, we see that all sin leads to death, such is the nature of the Law. The scribes and Pharisees are rebuked harshly later in Chapter 23, because they had added to the Law their own traditions… and they did so falsely. Understand, dear Christian, that our post-modernist relativism doesn’t save us here… we don’t get to wiggle out by redefining what an oath is or a promise or a contract. Jesus breaks it down to, “Let what you say be simply ‘Yes’ or ‘No’; anything more than this comes from evil.” Anything beyond yes or no comes from evil. Let’s look at the Law that was given to Moses regarding this.

Swearing falsely by God’s name is blasphemy. Please move beyond the elementary understanding of using the Lord’s name as a curse word being blasphemy. It’s so much more than that. If you say, “I swear to God” that such and such is true, and it turns out to be false, you’ve lied AND you’ve blasphemed. If you say, “I swear to God I will do [such and such]” and you don’t do it, you’ve lied AND blasphemed. If you say “The Lord told me” and what you’ve said isn’t of God, you’ve lied AND blasphemed. We’ve minimized blasphemy in our culture, even in the Church, in much the same way we’ve minimized sexual immorality, in that we only seem to take notice when something Obvious has happened (scandal in the media). This is the Law, and its purpose is to identify sin. There is no muting it, or avoiding it. Praise be to God the Father for providing His Son, Jesus Christ as the only Atonement for our sin.

38 “You have heard that it was said, ‘An eye for an eye and a tooth for a tooth.’39 But I say to you, Do not resist the one who is evil. But if anyone slaps you on the right cheek, turn to him the other also. 40 And if anyone would sue you and take your tunic, let him have your cloak as well. 41 And if anyone forces you to go one mile, go with him two miles. 42 Give to the one who begs from you, and do not refuse the one who would borrow from you.

So, under the Mosaic Covenant, authority was given to Moses and the Levites to sit as judges over Israel. There are provisions in the Law and guidelines for administering punishment for breaking the Law.

Leviticus 24:17-22 (ESV) | An Eye for an Eye 17 “Whoever takes a human life shall surely be put to death. 18 Whoever takes an animal’s life shall make it good, life for life. 19 If anyone injures his neighbor, as he has done it shall be done to him, 20 fracture for fracture, eye for eye, tooth for tooth; whatever injury he has given a person shall be given to him.21 Whoever kills an animal shall make it good, and whoever kills a person shall be put to death. 22 You shall have the same rule for the sojourner and for the native, for I am the Lord your God.”

At His Resurrection, Jesus will be taking up the punitive authority unto Himself, as He is the promised Messiah, the Prophet who was to come to whom all must listen as the ultimate Judge. The Book of Hebrews lays this out very well when it refers to Jesus as the Great High Priest. The world governments maintain their authority granted to them by God (Romans 13:1-7), and Christ establishes His Church on the foundation of His Apostles. Christ holds the keys of Death and Hades (Revelation 1:17-18), so we (the Church) do not have authority to put anyone to death for sin. For now, the world retains that authority and will eventually use it against us, persecuting us in the Tribulation. We who have been granted eternal life by Grace through faith in Christ Jesus dare not exact revenge or retaliate in the temporal against those who sin against us. Rather, we are to forgive others as we have been (and are being) forgiven. We’ll see Jesus expand on this next week when He teaches us how to Pray.

43 “You have heard that it was said, ‘You shall love your neighbor and hate your enemy.’ 44 But I say to you, Love your enemies and pray for those who persecute you, 45 so that you may be sons of your Father who is in heaven. For he makes his sun rise on the evil and on the good, and sends rain on the just and on the unjust. 46 For if you love those who love you, what reward do you have? Do not even the tax collectors do the same? 47 And if you greet only your brothers, what more are you doing than others? Do not even the Gentiles do the same? 48 You therefore must be perfect, as your heavenly Father is perfect.

Jesus seems to be returning to Leviticus 19 here, but it seems that He’s addressing a false interpretation of this passage, possibly from the Pharisees. I say that because of the times where Jesus answers the question of the “Greatest Commandment” and when He was asked to define “neighbor”.

Again, the commandment to “love your neighbor as yourself” is the Law. We also see here what we covered last week, that Jesus isn’t adding anything to the Law but clarity. Hate is the sin of murder. The Law of the Lord is perfect… and we are all sinners. Apart from Christ, we are nothing and can do nothing. The Law holds everyone equally condemned. The Grace of God is that He sent His son, Jesus to fulfill the Law, live a sinless… SINLESS life and then present Himself as the perfect sacrifice, the pure and spotless Lamb of God who takes away the sin of the world.

We will pick up in Chapter 6 and work through Jesus’ explanation of Worship. Jesus preached the Law, and did so with Authority for He is God. It cuts to the heart of man, and holds us all equally dependent upon His Grace and Mercy. The Law of the Lord humbles us into a right understanding of who we are. Jesus is now transitioning into teaching what proper Worship looks like. I look forward to next week’s study, should the Lord tarry.

Romans 15:5-6 (ESV) 5 May the God of endurance and encouragement grant you to live in such harmony with one another, in accord with Christ Jesus, 6 that together you may with one voice glorify the God and Father of our Lord Jesus Christ.