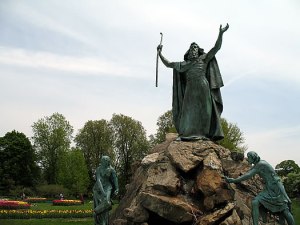 In our last Old Testament Study, we looked at how after God had provided the Children of Israel with mana in the wilderness (Jesus is the Bread from Heaven) He also provided them with water (Jesus called Himself the fountain of living water in the wilderness). Today’s post will be extra short so that (hopefully) you can take some time to review the OT studies leading up to Exodus 17.

Let’s jump into the text.

8 Then Amalek came and fought with Israel at Rephidim. 9 So Moses said to Joshua, “Choose for us men, and go out and fight with Amalek. Tomorrow I will stand on the top of the hill with the staff of God in my hand.” 10 So Joshua did as Moses told him, and fought with Amalek, while Moses, Aaron, and Hur went up to the top of the hill. 11 Whenever Moses held up his hand, Israel prevailed, and whenever he lowered his hand, Amalek prevailed. 12 But Moses’ hands grew weary, so they took a stone and put it under him, and he sat on it, while Aaron and Hur held up his hands, one on one side, and the other on the other side. So his hands were steady until the going down of the sun. 13 And Joshua overwhelmed Amalek and his people with the sword.

14 Then the Lord said to Moses, “Write this as a memorial in a book and recite it in the ears of Joshua, that I will utterly blot out the memory of Amalek from under heaven.” 15 And Moses built an altar and called the name of it, The Lord Is My Banner, 16 saying, “A hand upon the throne of the Lord! The Lord will have war with Amalek from generation to generation.”

Several interesting things here. The first thing I’d like to mention is that we shouldn’t read this portion as an isolated event, separated from all previous events. Such is the current, post-modern paradigm of viewing everything that happens as “new” and completely disconnected from everything that has happened before.

They are descended of Esau (Genesis 36). Though himself a son of Isaac, God rejected him in favor of Jacob, whom he would rename Israel. Esau took wives from the daughters of Heth (Canaan) further separating himself from the Promise to Abraham. Now, after so many generations, Amalek is waging war with the People of God, the Children of Promise.

Whose Victory of Battle?

Moses sends Joshua to choose men for battle, but to whom is the victory attributed? The Lord. Moses goes up on a hill and holds, not his staff, but the Staff of God. While in some cases it might be referred to as Moses’s staff, in this case Moses is clear to Joshua what is going to take place. The very staff that God instructed Moses and Aaron to use for each the plagues against Pharaoh, the staff with which God parted the Red Sea and the same staff God commanded Moses to strike the rock with at Horeb. Moses wasn’t saying “I’ll make sure you win”, he was saying “the Lord God is your Banner in battle”.

While researching this passage, there was an entry in the Reformation Study Bible I thought was very informative, demonstrating something that might be lost in translation for us.

17:15 The Lord is my banner. The Hebrew word translated “banner” underlies “staff” in v. 9 and is used for the “pole” on which the bronze serpent was later placed (Num. 21:8). Since “banner” suggests cloth to us, this connection is lost. A spear could serve as a standard in battle, with or without bits of cloth tied to it. Later, a staff might have a device on it to mark the rallying point for troops. In the ancient world, these were sometimes images or signs of the gods. Moses’ staff is the ensign to which Joshua’s army could look and that symbolized God’s saving power. Moses declares that God Himself is the Standard, the Ensign of His people.

Very cool. Once again, what we are seeing here is not the greatness of Joshua’s leadership, but the Mighty Hand of God at work, showing His favor upon Israel, Moses, and Joshua. Remember the Song of Moses as recorded in Exodus 15.

The Song of Moses

15 Then Moses and the people of Israel sang this song to the Lord, saying,

“I will sing to the Lord, for he has triumphed gloriously;
the horse and his rider he has thrown into the sea.
2 The Lord is my strength and my song,
and he has become my salvation;
this is my God, and I will praise him,
my father’s God, and I will exalt him.
3 The Lord is a man of war;
the Lord is his name.

4 “Pharaoh’s chariots and his host he cast into the sea,
and his chosen officers were sunk in the Red Sea.
5 The floods covered them;
they went down into the depths like a stone.
6 Your right hand, O Lord, glorious in power,
your right hand, O Lord, shatters the enemy.
7 In the greatness of your majesty you overthrow your adversaries;
you send out your fury; it consumes them like stubble.
8 At the blast of your nostrils the waters piled up;
the floods stood up in a heap;
the deeps congealed in the heart of the sea.
9 The enemy said, ‘I will pursue, I will overtake,
I will divide the spoil, my desire shall have its fill of them.
I will draw my sword; my hand shall destroy them.’
10 You blew with your wind; the sea covered them;
they sank like lead in the mighty waters.

11 “Who is like you, O Lord, among the gods?
Who is like you, majestic in holiness,
awesome in glorious deeds, doing wonders?
12 You stretched out your right hand;
the earth swallowed them.

13 “You have led in your steadfast love the people whom you have redeemed;
you have guided them by your strength to your holy abode.
14 The peoples have heard; they tremble;
pangs have seized the inhabitants of Philistia.
15 Now are the chiefs of Edom dismayed;
trembling seizes the leaders of Moab;
all the inhabitants of Canaan have melted away.
16 Terror and dread fall upon them;
because of the greatness of your arm, they are still as a stone,
till your people, O Lord, pass by,
till the people pass by whom you have purchased.
17 You will bring them in and plant them on your own mountain,
the place, O Lord, which you have made for your abode,
the sanctuary, O Lord, which your hands have established.
18 The Lord will reign forever and ever.”

In Hebrews 11, we are taught that all of the mighty deeds accomplished in Scripture were by faith. Faith in whom? In the Only Living God of Abraham, Isaac, and Jacob, the Creator of all things. The Lord is my Banner… while there was a physical symbol of the favor of the Lord, neither Joshua, Aaron, Moses, nor Hur were under any misgivings that there was something in the staff itself, nor in the efforts of Moses. This was God’s work and God’s victory over Amalek.

20 Now may the God of peace who brought again from the dead our Lord Jesus,the great shepherd of the sheep, by the blood of the eternal covenant, 21 equip you with everything good that you may do his will, working in us that which is pleasing in his sight, through Jesus Christ, to whom be glory forever and ever. Amen.

May the Grace of God be with you today and forever,
In Christ Jesus,
Jorge

My Tweets
Join 786 other subscribers