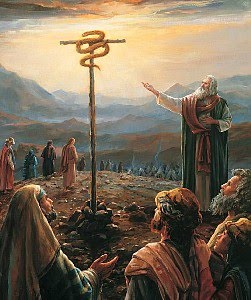 We discuss often here the need to preach both Law and Gospel. Most of the time when I try to capture the Gospel, I simply refer to how the Apostles Paul or Peter explained the Gospel. However, I realized that I have yet to really talk about how Jesus explained His own Gospel. Let us begin by reading John 3, where Jesus is teaching Nicodemus about Salvation.

John 3:1-21 (ESV)
1 Now there was a man of the Pharisees named Nicodemus, a ruler of the Jews. 2 This man came to Jesus by night and said to him, “Rabbi, we know that you are a teacher come from God, for no one can do these signs that you do unless God is with him.” 3 Jesus answered him, “Truly, truly, I say to you, unless one is born again he cannot see the kingdom of God.” 4 Nicodemus said to him, “How can a man be born when he is old? Can he enter a second time into his mother’s womb and be born?” 5 Jesus answered, “Truly, truly, I say to you, unless one is born of water and the Spirit, he cannot enter the kingdom of God. 6 That which is born of the flesh is flesh, and that which is born of the Spirit is spirit. 7 Do not marvel that I said to you, ‘You must be born again.’ 8 The wind blows where it wishes, and you hear its sound, but you do not know where it comes from or where it goes. So it is with everyone who is born of the Spirit.”

9 Nicodemus said to him, “How can these things be?” 10 Jesus answered him, “Are you the teacher of Israel and yet you do not understand these things? 11 Truly, truly, I say to you, we speak of what we know, and bear witness to what we have seen, but you do not receive our testimony. 12 If I have told you earthly things and you do not believe, how can you believe if I tell you heavenly things? 13 No one has ascended into heaven except he who descended from heaven, the Son of Man. 14 And as Moses lifted up the serpent in the wilderness, so must the Son of Man be lifted up, 15 that whoever believes in him may have eternal life.

16 “For God so loved the world, that he gave his only Son, that whoever believes in him should not perish but have eternal life. 17 For God did not send his Son into the world to condemn the world, but in order that the world might be saved through him. 18 Whoever believes in him is not condemned, but whoever does not believe is condemned already, because he has not believed in the name of the only Son of God. 19 And this is the judgment: the light has come into the world, and people loved the darkness rather than the light because their works were evil. 20 For everyone who does wicked things hates the light and does not come to the light, lest his works should be exposed. 21 But whoever does what is true comes to the light, so that it may be clearly seen that his works have been carried out in God.”

Praise the Lord! Something I’d like to explore is the reference Jesus made to Moses lifting up the serpent in the wilderness. Let’s look at this event in Numbers chapter 21.

Numbers 21:4-9 (ESV)
4 From Mount Hor they set out by the way to the Red Sea, to go around the land of Edom. And the people became impatient on the way. 5 And the people spoke against God and against Moses, “Why have you brought us up out of Egypt to die in the wilderness? For there is no food and no water, and we loathe this worthless food.” 6 Then the Lord sent fiery serpents among the people, and they bit the people, so that many people of Israel died. 7 And the people came to Moses and said, “We have sinned, for we have spoken against the Lord and against you. Pray to the Lord, that he take away the serpents from us.” So Moses prayed for the people. 8 And the Lord said to Moses, “Make a fiery serpent and set it on a pole, and everyone who is bitten, when he sees it, shall live.” 9 So Moses made a bronze serpent and set it on a pole. And if a serpent bit anyone, he would look at the bronze serpent and live.

So the Israelites were being led through the wilderness by God. Fed by God. Protected by God. After having been rescued from Pharaoh by God. And they despised His provision. Truly we are a stubborn and insolent race. As punishment for their sin, the Lord sent fiery serpents. An interesting thing to send, don’t you think? As a child I used to envision serpents of fire, but looking at the Hebrew word used for “fiery” it’s Saraph, we see 2 possible translations:

Clearly the translators chose the context appropriate “fiery serpent” here. Notice that they are considered “fiery” by virtue of the burning effect of their poison. Here we see that the wages of their sin is a fiery death. When the people repented and sought relief from their punishment, God told Moses to make a fiery serpent and set it on a pole. We know that the fiery serpent crafted by Moses and placed on a pole represents Jesus (because He said so). But why a serpent? Isn’t the serpent the one who was killing the Israelites? No, God’s punishment was the righteous, just, and holy response to their sin. Their sin is what is killing them. God’s grace and mercy allowed for a sign to be given them, so that all who were bitten and looked to the bronze serpent might live. But why a serpent? Let’s look at some other texts to see if we might better understand the picture of Christ’s atoning sacrifice on the cross. Since we got here by going backward, let’s continue to the fall of man, the point where sin entered into this world through Adam.

Genesis 3:9-15 (ESV)
9 But the Lord God called to the man and said to him, “Where are you?” 10 And he said, “I heard the sound of you in the garden, and I was afraid, because I was naked, and I hid myself.” 11 He said, “Who told you that you were naked? Have you eaten of the tree of which I commanded you not to eat?” 12 The man said, “The woman whom you gave to be with me, she gave me fruit of the tree, and I ate.” 13 Then the Lord God said to the woman, “What is this that you have done?” The woman said, “The serpent deceived me, and I ate.”

14 The Lord God said to the serpent,

“Because you have done this,
cursed are you above all livestock
and above all beasts of the field;
on your belly you shall go,
and dust you shall eat
all the days of your life.
15 I will put enmity between you and the woman,
and between your offspring and her offspring;
he shall bruise your head,
and you shall bruise his heel.”

Here is where we have our first promise that God will send a Savior through Eve. The immaculate conception granting Jesus full humanity by Mary, while maintaining His Godliness (completely sinless) because He was not born of the seed of man, but of God the Father.  Everyone else born of the flesh is born into the sin of Adam… born with the poison of sin coursing through their veins, a sin that leads to a fiery death. Christ was promised to defeat Satan, though Satan will bruise His heel (the death on the cross). But how does this connect the serpent on the cross to Jesus (besides Jesus saying so)? I think Paul articulated this extremely well in 2 Corinthians.

2 Corinthians 5:14-21 (ESV)
14 For the love of Christ controls us, because we have concluded this: that one has died for all, therefore all have died; 15 and he died for all, that those who live might no longer live for themselves but for him who for their sake died and was raised.

16 From now on, therefore, we regard no one according to the flesh. Even though we once regarded Christ according to the flesh, we regard him thus no longer. 17 Therefore, if anyone is in Christ, he is a new creation. The old has passed away; behold, the new has come. 18 All this is from God, who through Christ reconciled us to himself and gave us the ministry of reconciliation; 19 that is, in Christ God was reconciling the world to himself, not counting their trespasses against them, and entrusting to us the message of reconciliation. 20 Therefore, we are ambassadors for Christ, God making his appeal through us. We implore you on behalf of Christ, be reconciled to God. 21 For our sake he made him to be sin who knew no sin, so that in him we might become the righteousness of God.

The reason the snake was put on the cross, correlates to the reason Christ had to die on the cross… to bear the full penalty of the sin of mankind as a substitution for us. So that all who believe in Him will not die, but have everlasting life in Him who bore the penalty for us. Those who do not believe, are condemned already, for they bear the fiery poison of sin. Who has been bitten? All of us. The bitten Israelites looked to the serpent on the cross so that they would not have to die to its poison; rather, the symbolic death of the serpent on the pole would cover their righteous and just punishment for their sin. Similarly, each of us who has been born dead in our sins and trespasses must turn to the Gospel of Jesus Christ, His literal death on the cross as a substitutionary payment for the righteous and just punishment due us for our sin, so that we might join in His resurrection and gain entry into the Kingdom of Heaven.

As ambassadors for Christ, let us be good stewards of His love and grace that was so richly poured out for us on the cross. Let us preach the Gospel of Jesus Christ faithfully and passionately, so that all of creation might hear the Word of God, and be reconciled to God through Jesus Christ.

May the Lord bless and keep you,
In Him,
Jorge

My Tweets
Join 788 other followers