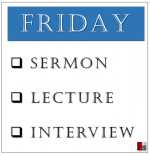 If you are unfamiliar with Liturgical Worship, or following the church year, we are in the season of Epiphany. The season begins with the visiting of the Magi (Christ revealed to the Gentiles) through the Transfiguration. Today’s sermon text will be looking at Christ’s first recorded Miracle at the wedding in Cana.

Today we’ll be listening to the sermon given last week by Pr Hans Fiene of River of Life Lutheran Church, Channahon, IL.

was born in Duluth, Minnesota in late 1980. The son of a Lutheran pastor, Rev. Fiene and his family spent time in Utah and Connecticut before settling in Indiana. After graduating from Indiana University with a B.A. in English, Rev. Fiene began his studies at Concordia Theological Seminary in Fort Wayne, Indiana where he earned a Masters of Divinity in May of 2008.

Rev. Fiene and his wife Katie were married in August of 2005. God has blessed them with three young sons: John, August, and Anders. In addition to serving Christ’s flock at River of Life, Rev. Fiene also loves writing, singing, playing a little piano, and getting far too emotionally invested in the Indianapolis Colts.

Note: In a Lutheran Divine Service the sermon comes after the reading of the assigned texts (an Old Testament text, an Epistle reading, and a Gospel text) and the Pastor’s sermon will focus on one or more of these readings. That is why in this sermon you don’t hear the text being read specifically. The congregation has already heard the text read aloud while they read along.

On the third day there was a wedding at Cana in Galilee, and the mother of Jesus was there. Jesus also was invited to the wedding with his disciples. When the wine ran out, the mother of Jesus said to him, “They have no wine.” And Jesus said to her, “Woman, what does this have to do with me? My hour has not yet come.” His mother said to the servants, “Do whatever he tells you.”

Now there were six stone water jars there for the Jewish rites of purification, each holding twenty or thirty gallons. Jesus said to the servants, “Fill the jars with water.” And they filled them up to the brim.And he said to them, “Now draw some out and take it to the master of the feast.” So they took it. When the master of the feast tasted the water now become wine, and did not know where it came from (though the servants who had drawn the water knew), the master of the feast called the bridegroom and said to him, “Everyone serves the good wine first, and when people have drunk freely, then the poor wine. But you have kept the good wine until now.” This, the first of his signs, Jesus did at Cana in Galilee, and manifested his glory. And his disciples believed in him.

After this he went down to Capernaum, with his mother and his brothers and his disciples, and they stayed there for a few days.

I hope you enjoyed listening to this sermon. Pastor Fiene did a wonderful job of rightly dividing Law and Gospel.