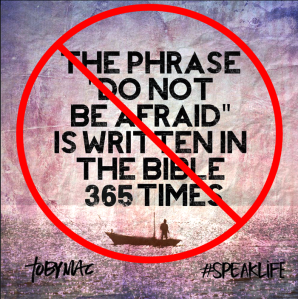 Good Monday Morning! This season has been quite busy for us lately, and I have a few projects in the works that haven’t gotten the kind of attention they require, sadly. Today’s CTT post will be a quick look at what transpired last week when I tried to address falsehood from a well-known and liked Christian artist’s Facebook page.

On November 7th, the team that manages the TobyMac Facebook Page posted a custom-made Christian Meme making the following claim:

This meme popped up on my feed and at first I thought, “well that’s kinda cool”… but then I thought… “that number seems awfully high”. I opened up Bible Gateway and searched for the phrase “do not be afraid” and got the following results:

So, not even close to 365… not even if you add up the results from the 4 common translations. The meme has no other information apart from this assertion. The assertion is false… significantly false. There is no truth in this meme whatsoever. In other words, this is a lie. The intent might be   to convey an idea that there isn’t a day of the year where we should be afraid. However, that is not what it actually says… it’s hoping to infer that message when someone associates the number “365” with the number of days in a non-leap-year.

My first reaction was to post a comment “My search only came up with 33” and a link to the 33 hits in ESV via BibleGateway.com. My comment didn’t get a lot of response, but here is the conversation that ensued:

What principle? I took a screen capture of the image this morning 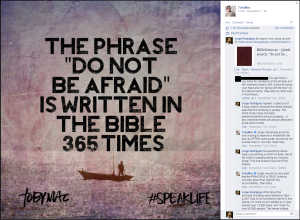 While reading through the short interchange, one might get the idea that TeamToby indeed acknowledged the lie of the meme and that they were truly grateful for being held accountable. However, it is now November 10th, and the image has garnered 116,154+ “Likes” and has been “shared” 68,076+ times (the number is still climbing). Does this demonstrate repentance or accountability? No.

The photo has 1,600+ comments. Most of them are the expected response along the lines of “one for every day of the year”, but there are several calling out the lie in the meme. TeamToby replies to most of them along the lines of “our bad” and “at least the Principle is True”. In Facebook, those comments aren’t seen unless someone is interested in reading the replies to those correcting the meme. So these concessions are not a public sign of repentance or repudiation of the lie; rather, they are an attempt to calm or quiet the rebuke. Let’s look at some Scripture.

17 Now this I say and testify in the Lord, that you must no longer walk as the Gentiles do, in the futility of their minds. 18 They are darkened in their understanding, alienated from the life of God because of the ignorance that is in them, due to their hardness of heart.19 They have become callous and have given themselves up to sensuality, greedy to practice every kind of impurity. 20 But that is not the way you learned Christ!—21 assuming that you have heard about him and were taught in him, as the truth is in Jesus, 22 to put off your old self, which belongs to your former manner of life and is corrupt through deceitful desires, 23 and to be renewed in the spirit of your minds, 24 and to put on the new self, created after the likeness of God in true righteousness and holiness.

25 Therefore, having put away falsehood, let each one of you speak the truth with his neighbor, for we are members one of another. 26 Be angry and do not sin; do not let the sun go down on your anger, 27 and give no opportunity to the devil. 28 Let the thief no longer steal, but rather let him labor, doing honest work with his own hands, so that he may have something to share with anyone in need. 29 Let no corrupting talk come out of your mouths, but only such as is good for building up, as fits the occasion, that it may give grace to those who hear. 30 And do not grieve the Holy Spirit of God, by whom you were sealed for the day of redemption. 31 Let all bitterness and wrath and anger and clamor and slander be put away from you, along with all malice. 32 Be kind to one another, tenderhearted, forgiving one another, as God in Christ forgave you.

14 About the middle of the feast Jesus went up into the temple and began teaching. 15 The Jews therefore marveled, saying, “How is it that this man has learning, when he has never studied?” 16 So Jesus answered them, “My teaching is not mine, but his who sent me. 17 If anyone’s will is to do God’s will, he will know whether the teaching is from God or whether I am speaking on my own authority. 18 The one who speaks on his own authority seeks his own glory; but the one who seeks the glory of him who sent him is true, and in him there is no falsehood.

44 You are of your father the devil, and your will is to do your father’s desires. He was a murderer from the beginning, and does not stand in the truth, because there is no truth in him. When he lies, he speaks out of his own character, for he is a liar and the father of lies.

I know this is coming very strongly, but there are no “harmless lies”. There is no falsehood in God, Jesus, or the Holy Spirit and there is no truth in the father of lies. One cannot rightfully assert that any truth by any measure might be obtained by perpetuating a lie of any degree.

Repentance is in order. TobyMac has been given a large platform with a lot of followers. This is no small thing.

4 For the weapons of our warfare are not of the flesh but have divine power to destroy strongholds. 5 We destroy arguments and every lofty opinion raised against the knowledge of God, and take every thought captive to obey Christ, 6 being ready to punish every disobedience, when your obedience is complete.

In closing, let’s look at how Paul addressed the resolution of his rebuke from his first letter to the Corinthians.

6 But God, who comforts the downcast, comforted us by the coming of Titus, 7 and not only by his coming but also by the comfort with which he was comforted by you, as he told us of your longing, your mourning, your zeal for me, so that I rejoiced still more.8 For even if I made you grieve with my letter, I do not regret it—though I did regret it, for I see that that letter grieved you, though only for a while. 9 As it is, I rejoice, not because you were grieved, but because you were grieved into repenting. For you felt a godly grief, so that you suffered no loss through us.

10 For godly grief produces a repentance that leads to salvation without regret, whereas worldly grief produces death. 11 For see what earnestness this godly grief has produced in you, but also what eagerness to clear yourselves, what indignation, what fear, what longing, what zeal, what punishment! At every point you have proved yourselves innocent in the matter. 12 So although I wrote to you, it was not for the sake of the one who did the wrong, nor for the sake of the one who suffered the wrong, but in order that your earnestness for us might be revealed to you in the sight of God. 13 Therefore we are comforted. And besides our own comfort, we rejoiced still more at the joy of Titus, because his spirit has been refreshed by you all.

Pray for  TobyMac and TeamToby and pray for the tens of thousands of people who were mislead by the lie of that meme.

My Tweets
Join 786 other subscribers