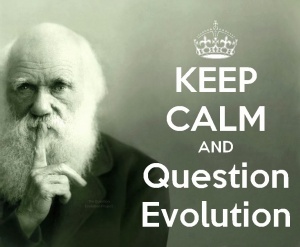 Today was declared “Question Evolution Day” by the folks behind the Question Evolution Project Facebook page and PiltdownSuperman.com. This event was brought to my attention when Chris Rosebrough at Fighting For The Faith conducted a telephone interview with Cowboy Bob Sorensen. It was a different sort of episode for F4F with only the phone interview in the first hour and a good sermon in the second.

The evolutionary view of origins takes as its basic premise a wholesale rejection of the Bible. Specifically, it rejects the claim that God created everything ex-nihilo (out of nothing) to full maturity and it rejects the Biblical account of a global flood. The first rejection is easy to understand, but the second premise is critical to buying the myth of evolution. If a global flash-flood that killed off every living creature on earth save a small remnant, and receded over the course of a year took place, it would be impossible to read the geological and fossil record in support of old-earth evolution. Impossible to read. Therefore, the rejection of the Biblical account of the Noadic flood is a fundamental to the non-catastrophic view of the geological record. Once you’ve rejected the possibility of a global flood, then you can create a narrative that only small-scale geological forces/movements that we can observe today could have created the various rock layers and the fossils they contain. Since current processes are gradual and slow, such a view necessarily inflates the estimated age of the earth to billions of years. So you see, it isn’t the evidence that points to an old earth, it’s the non-catastrophist interpretation of the evidence that does. The Biblical account of the Global Flood and Old-Earth interpretation of geology are mutually exclusive. One cannot hold both to be “true”.

Creation Not Limited to Genesis

My primary concern today isn’t convincing the lost (those who hate God) to abandon Evolution (becoming a theist doesn’t save, only the Gospel of Jesus Christ does); rather, to admonish my brothers and sisters in Christ to hold to the Truth of God’s Word. Let’s start with the clear statement of Genesis 1:1

Genesis 1:1 (ESV) 1 In the beginning, God created the heavens and the earth. …

Genesis 1:31 (ESV) 31 And God saw everything that he had made, and behold, it was very good. And there was evening and there was morning, the sixth day.

There is much more detail given, however since it takes place in a week and everything is created fully mature, it would have no impact in how we read the fossil record (because it records how things died, not when/how they were created). Let’s look at how embracing evolution negates more than just Genesis.

This passage refutes the notion that anything could have been made apart from God. The so-called theistic evolutionary view doesn’t resolve the problem, since such a view cannot fit with Genesis 1-9.

Exodus 20:8-11 (ESV)8 “Remember the Sabbath day, to keep it holy. 9 Six days you shall labor, and do all your work, 10 but the seventh day is a Sabbath to the Lord your God. On it you shall not do any work, you, or your son, or your daughter, your male servant, or your female servant, or your livestock, or the sojourner who is within your gates. 11 For in six days the Lord made heaven and earth, the sea, and all that is in them, and rested on the seventh day. Therefore the Lord blessed the Sabbath day and made it holy.

Hebrews 11:1-3 (ESV)11 Now faith is the assurance of things hoped for, the conviction of things not seen. 2 For by it the people of old received their commendation. 3 By faith we understand that the universe was created by the word of God, so that what is seen was not made out of things that are visible.

There is no room in scripture to hold onto Jesus Christ (the Word made flesh) and evolution equally. None. The Bible doesn’t teach a billions year-old universe. Even if treated as a man-made account of origins, it becomes difficult to push Creation beyond 10,000 years. Finally, avoid the strawman argument, “why would God create everything to look like it was billions of years old”. He didn’t. He simply created it fully mature and “very good”. It isn’t the evidence that points to billions of years, it is man’s interpretation of the evidence with a pre-supposition that God didn’t create it.

That there are confessing Christians who are willing to reject the flood as a global event breaks my heart. To reject or minimize the flood, is to trivialize one of God’s covenants with creation.

Incidentally, the fact that God made this covenant means that those who reject the one event will not be disproved later, for God WILL NOT allow a repeat flood of that magnitude to occur again.

Jesus referenced the days of Noah as history, not allegory. The coming of the Son of Man will be a global event, as was the flood in the days of Noah. The truth of God’s Word is an essential of the faith. Don’t be so bold as to assert that the question of Creation or the Flood isn’t a Gospel concern.

Jude 1:24-25 (ESV)24 Now to him who is able to keep you from stumbling and to present you blameless before the presence of his glory with great joy, 25 to the only God, our Savior, through Jesus Christ our Lord, be glory, majesty, dominion, and authority, before all time and now and forever. Amen.